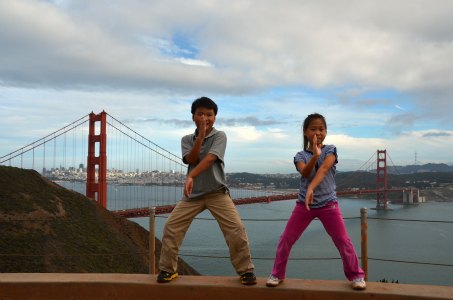 Hi, I just wanted to share some Wing Chun photos and stories from a family road trip to San Francisco and the Redwood Forest in Northern California. Specially made for the Wing Chun Community.

Yup, those kids are doing the kuan sao, double-arm block. The problem is they’re a bit over-exposed in the neutral stance (horse-, goat- stance), because getting kicked in the “you know where” is a big possibility.

A proper front stance wouldn’t work here, because they’d fall off the cliff and mommy would get real mad at daddy.

The Redwood Forest was much more impressive than I expected. It’s an old growth forest, which means it’s prehistoric, as in very old.

I felt a lot of great vibes side kicking among giants. We plan to go back, camp there, practice some Wing Chun, and get in harmony with the ancients.

That would be something special, wouldn’t it? Llike reaching Kung Fu Nirvana.

That’s us playing Wing Chun on logs. Lincoln Logs can’t compete with how much fun we had here.

As you can see from the photo, the kiddies are better at kung fu than daddy.

By the way, that’s a round kick being deflected by a gan sao by the kiddies. And daddy, above, is doing a fook sao, stomp kick, low palm strike combination from the first section of the dummy form.

That is, the Wing Chun wooden dummy form, which has a whole new meaning in this forest. So much wood everywhere, but I still don’t own a wooden dummy ;-[

The funny thing was we walked through San Francisco’s Chinatown looking for something to eat, and by chance we passed this Wing Chun kung fu school.

You probably can’t read the yellow sign, but it says Wing Tsun. Another way to spell Wing Chun. I believe it’s affiliated with Grandmaster Leung Ting, but don’t quote me.

I had no idea it was here. I wasn’t even looking for a school. But there it was. Like an ominous sign from the gods of Wing Chun. Train harder…

Too bad they were closed. Another sign from the Wing Chun gods… Go home!

Our kung fu trip would have been more interesting if we took a few lessons, don’t you think?

If you liked this Wing Chun related journey, you’ll love:

Wing Chun Life Visits Peru Three sifus, and one grandmaster who studied under BOTH Huang Fei Hong and Chan Wah Shun. Can’t get better than that!