It was a pretty movie. It had great fight scenes. Zhang Ziyi and Tony Leung play the main characters. But it was a Wong Kar-wai directed film. 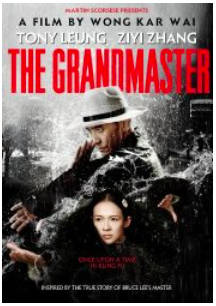 It’s not fun for most movie audiences.

And that’s too bad because I was hoping The Grandmasters (The Grandmaster in the U.S.) would be different. He spent eight (8) years making this film (in the interim Donnie Yen’s Ip Man movie came out, along with its sequels). And the main actors trained full-time in their respective martial arts for over a year each.

Chen Chang, who plays Razor, was the Baiji master in the movie (more about his character, or lack of it below). By training hard for his role, Chen Chang entered and won a Baiji competition in China! That’s how dedicated these top notch actors were. You can see some video clips of their training here.

The Worst Part About This Movie…

Let’s get to it. The movie’s pace is slow.

The story is okay, but multi-layered. In other words, it was kind of hard to follow (even though it was slow).

This is never good in a movie because it forces you un-suspend belief, fall back to reality, and break your enjoyment of the film because you have to ask yourself, in real time, “what just happened?”

For instance, the Razor character seems to pop out of nowhere. He was never fully developed in the movie. Yet, toward the end he has an epic fight scene. What?

Great scene, but it felt like the editors just wanted to drop it into the movie because it was cool.

What’s Good About the Film

The fight scenes and solid actors.

Wong Kar-wai spent many of the eight years developing this film by interviewing kung fu masters.

During this process, without any previous martial arts background, he developed a huge respect for kung fu.

And he wanted to represent the styles as faithfully as possible through film.

The result is that the action scenes are great!

For the most part Wing Chun looks authentic. There was minimal use of high-wire work or other special effects. People got their behinds kicked raw.

Cung Le plays a small part as a bad guy and has a killer fight with Ip Man (played by Tony Leung). Cung Le is a professional MMA fighter (Strikeforce, UFC) and he’s fierce on film.

I watched the movie in Chinese. I don’t speak much Chinese at all, so a friend interpreted it in broken real-time while we watched.

The visuals captivated me, yes. But what kept my interest in addition to the action was the solid acting from Tony Leung (Ip Man) and Zhang Ziyi who plays the female lead, Gong Er, the Bagua/Xingyi master.

Should You See it?

If you train Wing Chun or kung fu, it’s almost an obligation to watch it. It’ll be worth it, because it represents one more part of our martial arts heritage.

And the movie is more entertaining than not (I’m just a harsh movie critic). Besides, after eight years working on it, I figure it should be better then Yen’s Ip Man, right?

If you like action movies, you may be disappointed. This is an artsy film, or avant-guarde (whatever that means), with a dash of kick-butt.

Have You Seen All These Wing Chun Films?