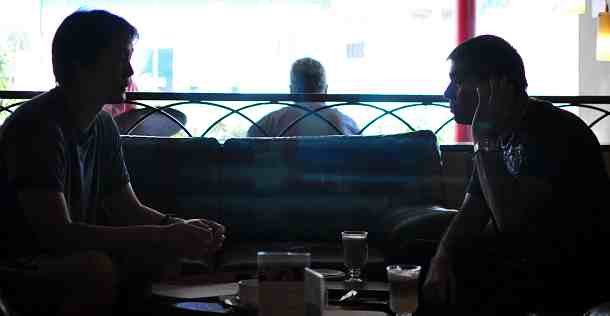 I learned about sifu Ricky Leturia three months before my excursion to investigate the existence of Wing Chun in the South American country of Peru.

During a family get together, a friend’s cousin gave me the tip about sifu and other than thinking it was interesting, I didn’t look into it any further.

But, a couple of weeks later I learned I was going to have a chance to visit Peru. So, I jumped into action and looked him up to see if he’d be open to meeting for an interview for WingChunLife.com.

While doing my background research, I found an old T.V. news report featuring sifu in the capital city of Lima, Peru. I was sold. It’s a good sign when a sifu gets positive news coverage…

But I Felt Intimidated… at First —

We met at a cafe-bistro called La Bocatta in the Surco neighborhood of Lima. He was there waiting for me with one of his students, Carlos.

He had a tough guy look. The first thing that stood out was all the ink on both their bodies. I don’t think either of my two Wing Chun sifus have tattoos (at least not visible). Same goes for my previous teachers and senseis in the other martial arts I’ve studied over the years.

The clincher was that he had a walking stick, which he kept next to him and out of view, in between the sofa seat cushion (“an improvised weapon,” I thought?).

Although I didn’t ask and confirm, after seeing his cane, my first thought was that he brought Carlos to watch his back; in case I was up to no good and using the interview as a trick to jump him.

This stuff happens, a lot. It happened to my previous Wing Chun sifu a number of times. So, I was prepared for the possibility that sifu Ricky Leturia, and the other sifus I interviewed in Peru, would have that concern in the back of their mind.

What I did to diffuse any tension and break the ice was dress lightly, no baggy clothes that would look like I was hiding a weapon, and I brought along my own “body guard ambassador.” My sister (who took all the cool photos for this trip). And who looks as intimidating as a Japanese anime version of Strawberry Shortcake.

It worked. We did not throw down inside the cafe-bistro and break any cappuccino cups.

It turns out sifu Ricky Leturia is a warrior scholar. We spent the better part of the interview discussing philosophy and life. Part of his personal mission is to help awaken his students, help them find happiness and peace, and discover the essence inside themselves.

“Kung fu is a way of life… Get away from the material… Never forget the basics, the essence,” sifu said.

He got started at the age of 13 and is the direct student of Choy Fong Lum, who trained him in the hard, physically demanding ways of the old days.

It was an honor to meet sifu Ricky Leturia and “break bread” over a cup of coffee (I should mention that he picked up the tab, too. Classy).

According to sifu, he comes from a well to do military family, and his father allowed him to follow his martial arts passion. In fact, his family agreed to let him study under grandmaster Choy Fong Lum as a live-in student for five and half years.

Note: This brings up an interesting thought – Many Kung Fu legends come from well to do families. It’s said Ip Man’s family was well off. Leung Jan was a successful doctor. And Bruce Lee’s father was a famous Chinese opera and movie star.

He and grandmaster become so close that to this day, sifu Ricky Leturia calls him, father. Sifu was a truly dedicated student. Throughout his teenage years, instead of partying and dating girls, he trained Kung Fu!

He Opens a Kung Fu School in Oklahoma, USA

After sigong Choy passed away around 1979, sifu Ricky Leturia decided to see the world and moved to the U.S. He opened and ran a Kung Fu school in Oklahoma for many years.

Currently, he has two students who are sifu themselves. One lives in the U.S., the other in Taiwan.

A few years ago, changes in his life (i.e. he met a girl) led him to leave the U.S. and eventually find his way back home to Peru. Today he teaches private lessons, as well as small group lessons every day of the week.

What His Student, Carlos, Says About Sifu

Carlos had a similar path as sifu. He moved away from Peru for many years, but instead of the U.S., he chose to live in England. While in the U.K., he picked up Wing Chun and studied under sifu Augustine Goh.

“When I returned to Peru, I spent many years looking for the right sifu. I couldn’t find any until I found sifu Ricky Leturia,” he said.

“Sifu dedicates a lot of time with each individual student,” Carlos said. “The problem is people have less time and less patience as before; so today, we don’t train as hard as they did in the past.”

Other Great Pages Related to Wing Chun and Peru: