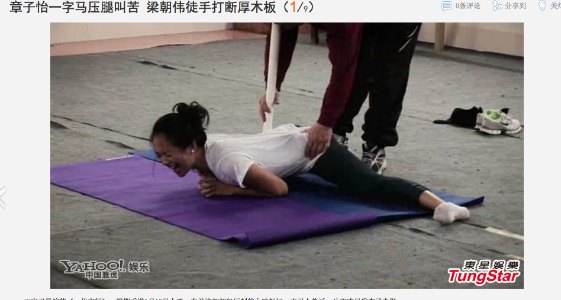 As you can see from the shot above the new Ip Man movie is serious business. And it better be. Rumors say The Grandmaster (一代宗师) was in production BEFORE the first Ip Man movie with Donnie Yen.

In a Yahoo China article, director Wong Kar Wai (Happy Together, In the Mood for Love) said he’s been working on this for eight years and was more involved with this movie than any other he’s worked on before.

He wrote, directed, and produced this new Ip Man movie; scheduled to release in Hong Kong on January 8, 2013. (We’ll review it as soon as it hits.)

Wong said he knew nothing about wushu (kung fu) when he started. He felt this was a big benefit because he was like a blank piece of paper, and this allowed him to see things clearly. (Without the normal martial arts, my sifu is better than your sifu bias).

One rumor says he interviewed over 100 sifus from around Guangdong (Canton) and Fujian (Foshan) as background research. You gotta love seeing dedication in one’s work.

The painful screen shot above is a picture of actress Zhang Ziyi (Crouching Tiger Hidden Dragon). According to reports, she and actor Tony Leung (Red Cliff, Infernal Affairs, Hero), who plays the title role of Ip Man, trained for three years to prepare for this movie and make it authentic.

Tony Leung trained Wing Chun and even learned to break wood boards. Zhang Ziyi trained Ba Gua and Tai Chi (and learned to do the splits).

Some say Leung got injured from his training, which slowed down production. You can see more behind the scenes training shots of both of them.

A lot of anticipation is behind this new Ip Man movie, especially after Donnie Yen’s Ip Man performance set the standard for all Ip Man, and possibly, all Wing Chun movies.

So far it sounds great. A great director, an experienced actress, and a killer actor… but what about the action?

I don’t want to get my hopes up too much, though. But so far, it looks like the new Ip Man movie has all the right pieces. Let’s hope all those pieces fit together and do grandmaster Ip Man and the art of Wing Chun justice.

Watch the trailer below: (*Update and second video below)

New Update and Behind the Scenes Video

Now that the Hong Kong release is coming soon (January 8, 2013) more information (promos) is coming out about this movie.

First, I need to mention the name. In the U.S. on IMDb.com, Hollywood’s movie database, the title has been translated as The Grandmaster. However, promo shots from Hong Kong show it as The Grandmasters – with an ‘s’ for plural.

The confusion makes more sense from a recent behind the scenes look at the making of the movie.

Originally the director, writer, and producer Wong Kar Wai wanted to make a new Ip Man movie. But it now turns out Ip Man may only be part of a larger cast of kung fu grandmasters.

Could he be the central star?

We’ll have to watch the movie when it comes out.

After doing his research for the movie and interviewing dozens of sifus from different styles, Wong Kar Wai felt he had to showcase wushu (kung fu).

[Read the original article above for background, if you haven’t already.]

He really fell in love with wushu (kung fu). He discovered many styles that are not very well known and have not been seen on screen, such as Baji and Bagua. (note: I’ve never heard of Baji before, and apparently they’re a very tight knit group.)

He hopes this movie will grow an interest in these other lesser known forms of kung fu, just like what happened to Wing Chun, after Donnie Yen’s benchmark performance in Ip Man.

It’ll be great to watch Bagua, Wing Chun, and Baji in action!

Will other kung fu styles find their way into The Grandmasters? We’ll have to wait until the movie rolls out to see the final version.

One great piece of trivia: Chen Chang, (Crouching Tiger Hidden Dragon, Red Cliff I and II), the actor who represents Baji in the film entered a Baji competition in China and won first place!

Each actor studied their respective martial art for two or three years to prepare for this film. Looks like it paid off for Chen Chang. Let’s hope the movie holds up.