In The Legend is Born, Ip Man Rises From The Ashes… 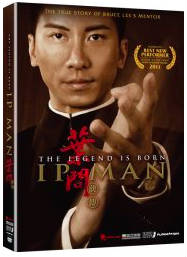 The Legend is Born: Ip Man movie is a big winner!

This is a great kung fu movie but some don’t agree. Here’s why…

It’s worth watching. It’s almost as good as Ip Man 1. Although, I still give the first Ip Man movie a higher rating. (Hats off to Donnie Yen for helping put Wing Chun on the map, like Bruce Lee did.)

The main reason some fans didn’t like The Legend is Born: Ip Man was because it is NOT affiliated to the first two movies, even though they used some of the same cast in different roles; specifically Sammo Hung.

This confused and frustrated many people. Then there was the problem that some DVD jackets had “Ip Man 3” written on them. I’m guessing those were bootlegs(?).

It deserves to be watched and judged on its own merits

If you watch the movie on its own merits, like I did, you’ll enjoy it very much. It also helps that this version is a pre-qual to the first two Ip Man movies. So the break from Donnie Yen isn’t so hard to take.

In “Legend,” Ip Man is young. The movie starts with him learning Wing Chun as a child, and then through his high school and university years.

I won’t give away the plot – you’ll have to watch it.

A living legend fights in the film!

In most kung fu movies, many of the real martial artists are on set as trainers and coaches.

One big plus here is Ip Chun, Ip Man’s surviving son, plays a big part in the movie and is in fight scenes too!

… You get to watch a real living legend on screen.

Along with authentic Wing Chun, you learn something in the movie that my current and previous sifu teach:

“if it works and you can get away with it, use it… you need to have variety… don’t be predictable… use it as a finishing move…”

How they demonstrate this in the movie also rubbed many Wing Chun practitioners the wrong way.

Again I won’t give away the details. But in many of the fight scenes they test the boundaries of Wing Chun principles.

Honestly, it made me feel a little uncomfortable.

What do you think?

Have you seen this movie? What’s YOUR opinion of it?

Comments on In The Legend is Born, Ip Man Rises From The Ashes…