Learning Kung Fu in the Heart of China 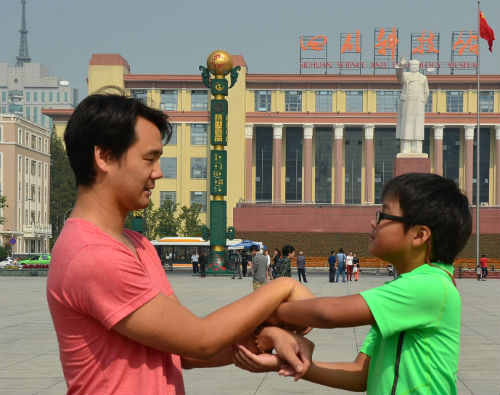 If you’ve ever wished to go to China and study kung fu or Wing Chun, I hope my experience helps you. Even if you don’t speak the language, I have a few tips that can ease your way.

Heading to China,
Wing Chun Was Not Part of the Plan —

Shame on me, but I headed to China – Zong Guo (中国) – to take care of some business and personal matters. Since I figured I had a tight schedule, I didn’t even bother to look for a Wing Chun school near where I was staying.

Tip: If you travel to China, Hong Kong, Macao, or Taiwan… take a moment to see if there are classes nearby, before you get there. Even taking one lesson would be worth the experience. Kung fu in China, how cool is that?!

You can find airline tickets and book hotels online. Plan ahead for best prices. Most travel sites have a notification service. You plug in your destination, and you get emailed when special prices comes up.

Things Happen for a Reason

I found this Wing Chun school by accident.

When was the last time you paid attention to a poster or other advertising when you were on the move and focused on something else? I almost never do… but things happen for a reason.

I needed coffee. There happened to be a McDonald’s on the way so I ducked in for a quick cup.

At the entrance, a number of posters advertised different businesses and classes also leasing space in the building.

My friend caught a glimpse of a poster that advertised Wing Chun classes!

This place was right around the corner from me in Chengdu, Sichuan – the heart of western China, bordering Tibet. We got the contact details for later.

You can find a group at almost any park or open space, especially in the cities.You could also ask the front desk at your hotel for some tips. There’s probably a group down the block.

The five pictures below are taken from different parks and cities (Xian, Chengdu, etc.) in China. Seek and you shall find.

Taiji is trained and practiced for health by many people (especially seniors). I’d say the Chinese treat it like a social activity.

Be personable and smile and use body language to have them understand you want to join in.

If you’ve ever played pick-up basketball, football, or tennis at your local park, learning Taiji in China is a lot like that, but without the competitive attitude. I think you’ll find them to be friendly, I did.

Usually there’s one advanced person who may lead the others. If that person is wearing a funky white Kung Fu uniform, that’s a dead giveaway.

Tip: If you want some exercise or to learn Taiji in China, find a local park or public space and get there early, before 8 am. Chances are good you’ll run into a group who’ll welcome you.

Holding Some Prejudices.
Shame on Me, Again…

Wing Chun and other martial arts are a different story from Tai Chi. These are taught formally and you’ll pay for instruction.

We called the number on the poster, and sifu Yang Zhan answered.

[Read the interview we had together]

Tip: If you don’t speak Chinese or know someone who does, you can look at his school’s Showcase page for the email address of one of his students who can communicate in English, he helped me most when I was there. Many Chinese speak some English as they learn it from elementary school.

We confirmed the class times and location, and later the same night we dropped by to watch a class.

I wanted to take it slowly, so we got to the last 20 minutes of the class just to observe.

The students seemed to be spending a lot of time on forms. And I was a bit conflicted because his lineage was different from mine. Subconsciously, I felt mine was ‘better’.

I don’t think I would have had this feeling if I was observing another style of martial art. Tsk, tsk…

I immediately felt disappointed with myself.

Indeed, this feeling may be common for many Wing Chun’ers (although most won’t admit it like I just did), especially if you’ve spent a long time training Wing Chun under your sifu and mastering your family’s style.

Tip: Keep an open mind. If you’re going to learn from a new sifu, expect to feel some level of discomfort at first. This is normal. Then, empty your cup and learn.

Let me tell you why I felt disappointed with myself, and why it was pretty deep.

A number of years ago, a student came to our kwoon to train with us. It turns out he was, and is, well known in the online Wing Chun community and YouTube.

He was with us for a couple of months and left.

I’m sure he’s a good guy. But the problem was that he came to us…

… and instead of learning our way, he did things – forms, chi sao, etc. – his way, and only his way.

It was like he ignored everything sifu said. I never once saw him try to adopt what we did or how we did it.

Yes, I understand he was testing his skill and technique against ours. And I’m all for keeping it real. But be honest and show some tact.

If you’re joining a class with other students, you’re entering that sifu’s home to learn.

If all you want is to test your skill and exchange technique, use a different setting or different circumstances.

I believe he would be an even better Wing Chun practitioner if he honestly learned what we do and adopted more of it.

Tip: Don’t be a jerk. Be humble. Show respect. Admit when you’re wrong and move forward.

What I Really Learned…

My time was short and I took less than a dozen classes.

Now that I look back, I realize what I learned most was humility and how to move my ego aside. Both lessons make for a better martial artist, in my opinion.

From the beginning, I made it clear to sifu that I wanted to learn his way. I did NOT want to be That guy…

In the time I was there he taught me the Sil Lum Tao (I only got to the first two sections), straight punches, front kick, a tan sao/punch, and pak sao/punch drill.

The good news is that in less than a dozen lessons, I advanced pretty quick.

But this is because I have a background in Wing Chun and I’m awesome (whoops, quiet ego!). Your personal experience may be different.

Even so, my straight punches were not as straight as I thought they were. The Sil Lum Tao is different enough that I had to adjust many things, my front kicks were ‘wrong’, and their footwork for the tan sao/punch drill was ‘funky’.

All my years tattooing muscle memory into my brain seemed to work against me. I had to break down those neuromuscular connections before rebuilding them into new patterns that followed sifu Yang’s lineage.

But after the first two classes (and biting my tongue, smiling wide, and taking deep breaths each time sifu, or students with less years training, told me my punches or tan sao or fook sao or wu sao or stance was wrong) things started to pick up speed.

In fact, my straight punches really are straighter now!

Tip: Keep a positive attitude and find humor in difficulty.

The one thing I really didn’t like was that we had to wear cloth-soled kung fu shoes. The kwoon had laminate floors and they were too slippery.

Sifu doesn’t require any uniform and he doesn’t use a belt-grading system, but he does require these shoes because he feels they cause less damage to your training partner.

I went to three different stores, but couldn’t find my size. I finally snagged a pair in the wholesale district located in the north of Chengdu, near the railway station.

During one of the classes, one student brought a friend. His buddy had a background in Thai boxing / Kick boxing.

At one point they were clowning around in class. His friend was throwing light round kicks and doing jab/cross combos. I was alone in my corner doing the first section of the Sil Lum Tao — over and over and over again.

The Wing Chun student didn’t know how to properly handle his friend’s attacks. He was forcing what he knew about Wing Chun, but it was not appropriate for the situation. In other words, he was getting tagged.

Sifu worked with other students and ignored their horseplay. Kind of like a mother tiger ignoring her cubs squabble.

In my mind I was yelling, “Sifu, do something! This is basic…”

My ego started to rise up and I felt a very heavy push to ‘show’ them how it’s done and represent Wing Chun.

But… I did not leave my corner.

Return to the Wing Chun Community

Comments on Learning Kung Fu in the Heart of China