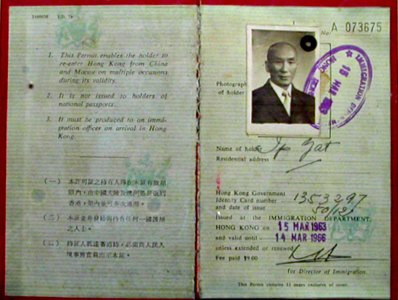 What really makes Ip Man stand out as an all time martial arts great is his tragic story. It’s a personal journey from riches to rags to Kung Fu legend. One that could only be written in China…

Some mistakenly believe Ip Man founded Wing Chun. This is not true. In reality, Ip Man’s style is one of a number of Wing Chun lineages. But a couple of facts make him and his Kung Fu family renown.

His line of Wing Chun is practiced widely today, especially in the Americas, Europe, and Australia, because many of his students emigrated from Hong Kong and took an entrepreneurial passion with them to teach and spread the knowledge worldwide.

Many of his “grand” and “great-grand” students have also adopted the entrepreneurial spirit and spreading the art even further, both offline and online.

Ip Man’s Wing Chun, or is it Yip Man?

Yip Man is an alternative spelling of Ip’s name. By looking at images of Ip Man’s passport (shown above), it is spelled “Ip” not “Yip”. You won’t be frowned upon for using “Yip”, many people do.

Ip Man was born Ip Kai Man on October 1, 1893 to a wealthy family in Foshan, China. He was the third of four children.

Depending on the source, he began studying Wing Chun under Master Chan Wah Shun either at age of 9 or 13. Master Chan was already very advanced in age at this time and its widely accepted that Ip was Chan Wah Shun’s last student.

Legend says that Master Chan was one of the Ip family’s body guards. He didn’t want to take on any new students and wasn’t interested in teaching Ip.

So young Ip got 300 pieces of silver (that’s a lot of money even today!) of his own money, which at the time was enough to buy a house, and offered it to Master to teach him.

After Chan learned the silver was indeed Ip Man’s, and not stolen, he realized how serious the boy was about learning Wing Chun. Master Chan waived the fee and taught him.

Ip studied between two and four years under Chan (before Master passed away) and under his advanced students, such as Ng Chung-sok, after Master’s death for an additional couple of years before moving to Hong Kong to study.

Silver Money Trivia: In the Ip Man movie – The Grandmaster they say he only paid Master Chan Wah Shun 20 silver dollars. So is it 20 silver dollars or 300 silver pieces, and how much money is that anyways?

First, let’s assume 300 pieces of silver is a lot of money, even today. But how about 20 ounces of silver?

The Joachimsthal’s coin was respected because of its purity. The Thaler, in one form or another was minted and used throughout Europe for over 400 years. The last ones were minted in Saxony around 1872, and the last circulating Thalers were demonetized by Germany in 1908.

Doing some simple math… ten days would earn a soldier one full ounce of silver, and a month of labor brought in about three ounces of silver to live on.

Since there really wasn’t any significant inflation in the world until all countries turned to currency backed by paper (opposed to hard and valuable commodities like silver and gold) around the 1970s, even if Ip Man only paid 20 silver dollars… that would be about 7 months income for a typical worker!

When he was about 15 years old, his family sent him to study in Hong Kong at St. Stephen’s College. Along with academic studies, he spent a lot of time fighting… and winning.

He found out the man was Leung Bik – son of Chan Wah Shun’s own teacher, Master Leung Jan.

Ip Man immediately studied under Lueng Bik for at least two and half years before returning home to Foshan after finishing his studies.

Another Version of the Story Goes…

Yip Man found the man living on a fishing boat anchored near the typhoon breakers in Hong Kong Bay.

The old man did not answer.

Yip Man picked up a stone and threw it in the man’s direction.

“What do you want, youngster?”

“I’ve heard that you are a great kung fu master and I’ve come here to find out. I’d like to spar with you.”

The man stood silent. He stared into Yip’s eyes, then moved his gaze up and down the boy’s length. “I don’t know, youngster,” he said at last, stroking his chin. “You look pretty puny. I might be wasting my time. I’ll have to see you do a form first.”

No sooner had the two squared off than Yip Man raced after the old man in a blaze of punches. The old man met Yip’s attack, stepped to the side, then … SPLASSSHHH!

The old man looked down at Yip in the waters of Hong Kong Bay. “What’s the matter, youngster?” he said. “I thought you wanted to spar!”

Yip climbed out of the bay, onto the dock, and back onto the boat. “Don’t worry, old man,” he said. “I’ll show you sparring!”: He launched after the old man, a jet on takeoff. A few techniques were exchanged at a furious pace, then … SPLASSSHHH!

“Hey, youngster! Do you want to spar or do you really want to swim?”

Yip Man could not understand what had gone wrong. He had done so well against other supposed ‘masters’, but he didn’t even know what this guy was doing….

After his studies, Ip Man returned home to Foshan, got married, had children, and ran the wildly successful family business.

His life was great – plenty of money and plenty of time for Kung Fu.

But Chinese history was roiling in the background and taking many sharp turns which would consume his life.

In the movie The Grandmasters, Ip Man’s character, played by Tony Leung says (loosely translated), “If you describe your life as the four seasons, my first 40 years were spring, the rest were winter.” Meaning it went straight to hell.

Problems were brewing throughout China during his life’s springtime, and this most likely helped edge his life straight into the dark winter.

Due to decades of internal struggles and imperial invasions by Western countries, China was cracking at the seams toward the end of the Qing Dynasty (China’s last empire). Consider…

** Ip Man’s first 40 years of life (his spring) would end somewhere around here ~ 1933. Japan occupies a large portion of China, including its coastal areas and his hometown. His home, fortune, business, and finances disappear. It’s a myth, war is not profitable **

Officially today, China claims Taiwan as one its provinces, while Taiwan claims it’s an independent country separate from China. They still have issues.

Around 1949, with the Communist taking over the country and the KMT gone, Ip Man escapes the mainland and emigrates to Hong Kong with hundreds of thousands of other Chinese refugees escaping the misery and hoping for greener pastures.

Grandmaster is impoverished and destitute by the time he reaches Hong Kong. He starts his life over from scratch at 56 years of age.

Teaching Wing Chun to the Public, for a Fee…

Ip Man believed that Wing Chun was more than just a form of martial arts. He wrote a code of conduct for the students. It was to be a way of life.

What’s significant is Ip Man was one of the first to teach Wing Chun (or any martial art) commercially to the public – for a fee.

I guess you could say fighting and martial arts was a professional skill, not a hobby as is common today, nor as a practical way to defend oneself and family.

Up to this time martial arts in China was taught within families, to a few hand selected and trusted students, and to professionals – warrior monks, soldiers, guards, etc.

But not to the general public. They were pretty much left defenseless.

Ip Man, mostly due to necessity, changed all of that.

The ugliness that is China’s modern history pushed Ip Man directly into the winter of his life, and in a way, we are lucky for his sacrifices.

Without the practical need to survive financially he may never have opened schools or shared Wing Chun with such a broad array of students.