In Wing Chun, Can You Use High Kicks if Really Needed? 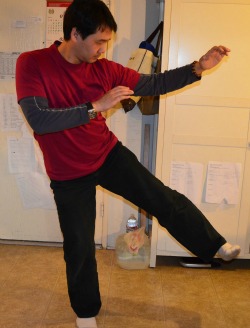 Side Kick Aimed Low – The Knee Joint is a Good Target

… I practice with my friends sometimes… but they use higher kicks… They learn karate and not kung fu… Their kicks seem to get me caught off guard… They use up in the air roundhouses and high kicks to the neck or face.

What do I do? How do I defend? And how do I attack?

1) How do you defend against high kicks? That could take a small book to answer. So let me focus on a couple of things; and in no particular order.

— The closer you are distance-wise, the more difficult it is for your opponent to use kicks (and for you to use kicks). They are long distance weapons. So you have to train your distances and sticking tighter to your opponent and knowing when you’re in the kicking danger zone. This comes from practice.

— Keep your guard up.

— Use your footwork to absorb and deflect round kicks. Use things like the defensive step.

— Move your body around (with foot work). Don’t present a steady target.

— Remember to defend and attack at the same time. For example, If he kicks at your head with a high round kick and you’re able to do a defensive step while deflecting his kick with a double pak sao, you could use a knee strike into his kicking leg as it comes down (be careful with this, do it slow and under control), or you could counter with a side kick into his torso (before he has a chance to bring his kicking leg back down).

— Lastly, pay attention to their hips. The hips often gives clues as to the height of a potential kick. If the forward hip is angled high, this gives you a clue that the kick is being aimed high, and vice-versa. It takes practice to read.

But as my sifu likes to say, if you can get away with it, and it works, use it. However, I suggest you train your mid- and low- kicks first. Make them perfect. Then if you want, you can play around with high kicks.

Review: How to Make Your Wing Chun Kicks Invisible

Whats the Most Common Pivot Point in Your Footwork?

Grandmaster Moy Yat – The Look of a Kick

Comments on In Wing Chun, Can You Use High Kicks if Really Needed?