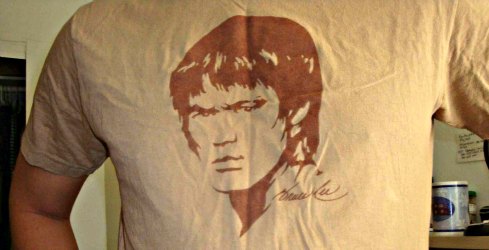 Four decades after Bruce Lee’s death, he continues to inspire not only martial artists and martial arts fans, but anyone who strives to reach perfection.

When you hear the name “Bruce Lee” you’ll probably picture the martial artist and actor. But did you know he was much more than that?

Before talking about how he died and some of the conspiracies surrounding his death, it’s best to touch a bit on what matters most — how he lived.

It’s for how he lived that drives his legacy and popularity today.

In 2013, one famous auction house sold out their collection of memorabilia that commemorated his 40th anniversary. They received almost $84,000 (62,000 euro) for one little item.

In January 2014, Bruce Lee was #15 on Sports Illustrated Top 50 Athletes of All Time, joining athletes like Royce Gracie, Tiger Woods, and Muhammad Ali.

That’s how much he’s still with us today.

Bruce Lee is popularly known for his outstanding martial arts skills, optimal physical condition, and captivating acting skills. However, many don’t know he was also a philosopher. A deep thinker.

He majored in philosophy while attending the University of Washington. Philosophy influenced everything he thought and did.

Kung Fu (also spelled Gung Fu), for instance, is more than just a physical form of martial arts. It is a philosophy that includes Taoism and Buddhism. Bruce believed kung fu taught both how to protect oneself physically and how to live one’s life.

He was passionate about martial arts and getting to know who he was. He once wrote, “Basically, I have always been a martial artist by choice and actor by profession. But, above all, I am hoping to actualize myself to be an artist of life along the way.”

As a true warrior-scholar he often sprinkled profound thoughts into his speech and television interviews. Here are a few:

Bruce Lee believed in strenuous aerobic workouts and weight training. He didn’t think spending hours and hours on forms was enough. And it showed in the great physique he had.

According to the book, Bruce Lee: Artist of Life, Bruce didn’t have an exercise routine that was set in stone. He was always experimenting with new exercises and routines to improve his endurance and strength.

Bruce was “above all else concerned with function,” said his first U.S. student Jesse Glover.

He seemed to have taken Sundays as his rest day.

Bruce Lee was born in the United States on November 27, 1940 in the Year of the Dragon. He was the fourth of five siblings.

His full name was Lee Jun Fan. A nurse at the hospital gave him the English name Bruce. That name wasn’t used until he started learning the English language at the age of 12 (His first language was Cantonese).

His mother Grace Ho and father Lee Hoi Chuen, a well known Chinese actor, were living in the U.S. while his father was performing on tour. Lee’s grandfather on his mother’s side was German.

When he was three months old, Bruce’s parents returned to Hong Kong and raised him there. Bruce worked as a child actor and appeared in 20 films by the age of 18. When he was less than a year old in 1941 he ‘performed’ in his first movie called Golden Gate Girl (he played the baby girl, not baby boy).

He started studying Wing Chun under Ip Man at age 13 and continued under Ip man for five years.

When he was 18 Bruce returned to the United States. He went to San Francisco with only $100 in his pocket.

One of his first jobs to support himself was as a dancing teacher. He then moved to Seattle where he had family friends and worked at their restaurant while attending the University of Washington.

Around this time is when he started teaching Wing Chun Kung Fu. One of his students was, Linda Emery, who became his wife.

They were married in 1964. They had two children – Brandon Bruce Lee and Shannon Emery Lee.

While recovering from a back injury (he didn’t properly stretch before doing some heavy weight training for his back), he spent his recuperating time writing down and documenting all his ideas and theories and research (just like any warrior-scholar would).

Much of this material was later posthumously published and has added to his legacy, which we all benefit from.

My favorite collection of his writings is the Tao of Jeet Kune Do. Jeet Kune Do, means “the way of the intercepting fist”.

This new martial arts style incorporates a combination of Wing Chun, fencing, boxing, and most importantly a unifying theory to combat without dogma.

How did Bruce Lee die?

Bruce was filming “Enter the Dragon” in Hong Kong in 1973. It was due to premier at Hollywood’s Chinese theater in August of 1973.

According to Bruce Lee’s official site, on July 20, 1973, he was offered a prescription painkiller Equagesic because he complained of a headache. After taking the painkiller, he laid down to take a quick nap.

Bruce then lapsed into a coma and was not able to be revived. He was pronounced dead upon arrival at the hospital.

Autopsies showed that Bruce had a hypersensitive (allergic) reaction to an ingredient in the pain medication. The result was swelling of the brain (cerebral edema), which led to the coma and caused his death.

He’s buried at Lakeview Cemetary in Seattle, Washington next to his son Brandon Bruce Lee (also an actor) who died from an accident on the set of a new movie he was filming called The Crow. His son also passed away at age young, 28.

A lot of conspiracy theories have floated around since Bruce’s death. Mostly because he was so popular, died so young, was in incredible shape, and happened to go into coma at the house of a popular actress of the time, Betty Ting-Pei.

Some claim the triads killed him for money, others believe there is a supernatural family curse since both he and his son died young.

According to pathology reports from the time, it was the allergic reaction to the pain medication that caused his early death.

However, the rumors continued to float around, especially since he was at Betty Ting-Pei’s house.

This is what happened that day…

Bruce and business partner Raymond Chow were at Betty’s home to discuss casting her for their new movie, The Game of Death. Raymond and Bruce had another meeting a couple of hours later, but Bruce complained of his headache.

The plan was he would take the pain medication Betty gave him, take a quick nap, then meet up with Raymond at the next meeting.

Too much time passed and Raymond called Betty’s home to ask where Bruce was. She told him he still taking his nap and she couldn’t wake him.

But Bruce Lee lives on…